About Spot of Mummery

Note: Everything below was written back in 2018, long before Endwalker released. I will need to sit down and edit this one day, but for now, I'm leaving it as I speculated it years ago. Interesting that the official writers found potential in Amon's character and story, too. Just.. in a different way than I did!

I wanted to talk a little about why the heck someone would choose to write about Amon. I can see the value in RPing many of the great in-game FFXIV characters, but why pick some mid-boss from the Crystal Tower?

Of all characters, why choose Amon?

As a writer, I don't always know the reason why I gravitate toward a specific character. I tend to enjoy writing about someone who has a strong, yet slightly ambiguous, background story... one that may not be a very good person. But one that I can see has promise and possibility to grow and change.

How did I get that out of a single boss fight in the middle of a 24 man raid?

Well, my interest in Amon goes back for a number of years.

It Started With A Hat...

Back during the FFXIV 2.0 days, I mained a bard. So, of course, when I saw Amon's Hat, I was in awe of everything it was. I was stoked when I got it as a drop, and even today, I refuse to put it in the Glamour Dresser for fear of losing it. 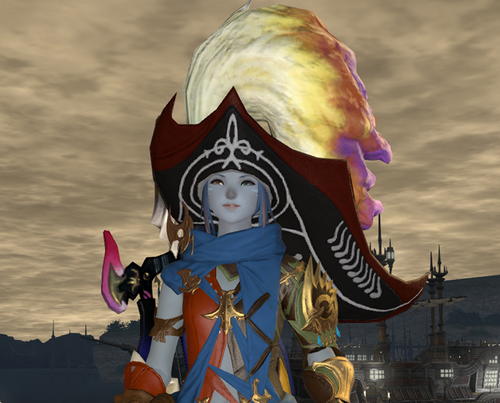 Syrcus Tower was relevant raid content at that time, and it became my favorite of the Crystal Tower series. It still remains my favorite because it's just a laid-back romp through some really pretty architecture and incredible lore.

Amon became a favorite boss fight because of all the variety of mechanics and the whimsical nature of the fight. Don't get me wrong, he's dangerous, and an unshielded Curtain Call can still insta-kill folks.

Some time back, maybe three or so years ago, I must have been looking up the official artwork for Amon for some reason, when I discovered something that forever changed the way I look at him...

Yep, it's true! See for yourself! 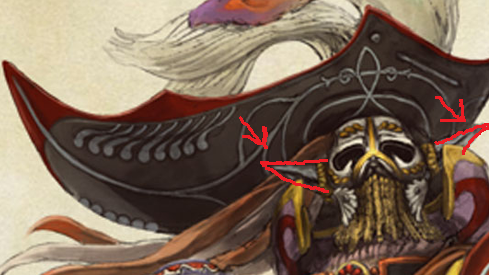 That means Amon was an Elezen!

Looking at information about the Elezen race, this isn't an odd idea at all. In fact, the wiki states:

...mighty Allagan Empire may have been substantially driven by the Elezen's distant forebears.

He was a man powerful enough to freeze time within the entire Syrcus Tower, in desperation of saving what was left of his people. I think that's the key for me... he did terrible things in the name of saving his people.

So, a man who has the knowledge to stop time, create clones and transfer life aether even generations after someone has died... Is he really going to be defeated for good by a 24-man alliance who's just there to get a hat drop?

I think he's got a few more tricks up his sleeve. And that's where this story begins.

While I will strive to follow FFXIV canon and lore as much as I can in writing this story, everything from the defeat and revival of Amon is obviously my own headcanon. I'll pull as much from the wikis and Encyclopedia Eorzea on the topic of Amon's past, but there's not a whole lot known about the details of Amon's character.

Amon is noted in several places as a technomancer and a mage of the Allagan Empire. He also has a flair for dramatics, and his magic has either musical (Forte) or theatrical (Curtain Call) names.

Keep in mind that what we know of the Allagan Empire seems to point to a sense of moral bankrupcy for the people as a whole. They were brilliant, powerful, and at one point controlled much of the world. And yet, the lore said once the people felt safe in their power, they turned to indulging their whims and desires in leisure and luxury.

Amon was a product of this world. He saw the decline of his people and wasn't content to watch everything fall apart. Though it's not clear what his position was in the Empire, he had enough clout to obtain the materials he needed and run his experiments on living subjects. The lore says he even experimented on himself... though the outcome of that wasn't detailed. 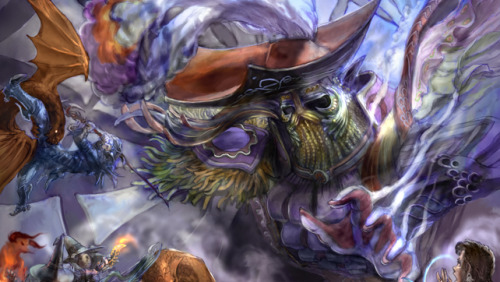 From these stories, I've gleaned that Amon was:

But Amon also watched his entire life's work fail in the end...

First Xande was consumed with madness caused by his resurrection. This eventually led to the fall of Syrcus Tower, which signaled the end of the Allagan Empire Amon so struggled to nurture.

Yet, Amon apparently remained loyal to Xande despite this. When NOAH revived the tower during the 2.0 story line of FFXIV, Amon then gave his life in a failed attempt to stop the Alliance from reaching Xande. And Xande was ultimately defeated.

Everything Amon did amounted to nothing in the end, and Syrcus Tower was placed back into stasis.

But what if... Amon didn't die in the Tower?

This was a man who knew how to transfer life-aether into cloned bodies to bring the dead back to life. We saw it over and over in Syrcus Tower, even in Xande himself.

What if Amon knew there was a good chance he would fall in battle against the Alliance of Hydaelyn's Chosen? What if he was ready for that, and set a transfer for his own aether upon his defeat?

If Amon escaped the fall of the tower, how would he adapt to a life after his own time and death? The cloned form he took is probably not strong enough to allow him the powers he had in his previous life. Not yet...

And then there's the little problem of what happens to a mind and spirit that's scarred by the experience of death. This drove Xande into a state of such nihilism that he made a pact with the Cloud of Darkness, seeking to deliver the world to the void.

Amon knows the danger of the procedure he carried out on himself... but will he be exempt from the darkness that eventually consumed the Allagan nation?

Welcome to Spot of Mummery.